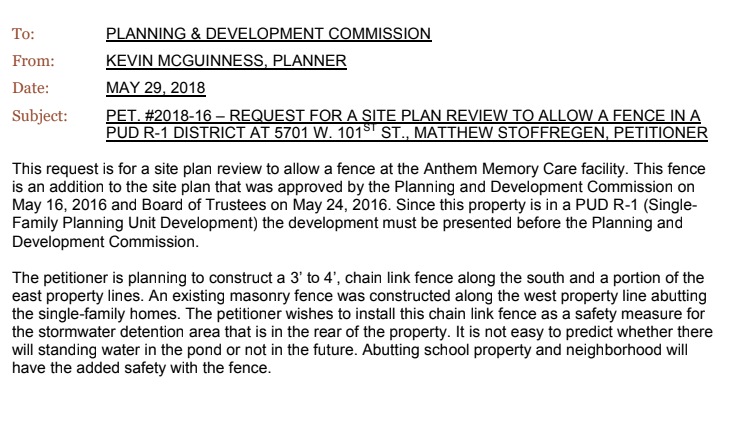 The Planning and Development Commission approved the petition filed by Anthem Memory Care, stipulating that a six-foot tall chain link fence shall enclose the entire detention basin. The matter will now go before the Board of Trustees for final approval.

The attractive nuisance doctrine applies to the law of torts in the United States. It states that a landowner may be held liable for injuries to children trespassing on the land if the injury is caused by an object on the land that is likely to attract children.

An attractive nuisance is an object, structure or condition that is both dangerous and irresistibly inviting or intriguing to children. Under attractive nuisance law, a landowner can be held responsible if a child is injured by an "artificial condition" on the landowner's property and all five of the following criteria are met:

Two years ago, area residents raised safety concerns about the detention basin being un-fenced. These concerns were dismissed by the village officials on the Planning and Development Commission and Board of Trustees. Area residents were repeatedly assured that the detention basin was going to be a "dry basin", meaning it would drain within a few days after a rain event.

Now that the basin is actually in operation, it appears that it is not "dry" enough and therefore a new variation is being sought by Anthem Memory Care to add some fencing. According to the petition that was filed, the additional fencing is being sought for safety reasons. This petition only serves to confirm what the "mis-informed" and "confused" area residents already knew over two years ago.

The village officials that approved this development in 2016 had an obligation to protect the general public and clearly failed to do so. The municipal code states as a condition for approving a special use permit... "That the establishment, maintenance or operation of the special use will not be detrimental to or endanger the public health, safety, morals, comfort or general welfare."

The area residents pointed out the public health/safety issues related to this detention basin and those concerns were dismissed. Now the developer is admitting that there is a safety issue that needs to be addressed. However, not only is their petition to install additional fencing belated, it is also insufficient.

The final bit of irony in this situation is that village officials likely allowed Anthem Memory Care to have this detention basin instead of an underground stormwater storage tank. Had they been denied the five foot setback variation, Anthem Memory Care would have been required to install some kind of underground stormwater storage because of its proximity to the FEMA-designated flood zone.

Whether or not that would have eliminated the detention basin altogether is not known. If it would have, then this real eyesore and safety hazard would not even exist. That would have meant no standing water for kids to play in (or get fenced off), no potential for out of control weeds, and the elimination of some prime mosquito breeding ground.

Village officials voted to approve Anthem Memory Care's variations and special use permit, so now the neighborhood gets to deal with the detention basin instead of having an underground solution which may have eliminated these public health/safety issues altogether.
Powered by