This slideshow depicts what the facility would look like with and without the large monument sign...
This was the signage proposed for another site that Anthem Memory Care was seeking to develop on a less than one acre site in Chicago... 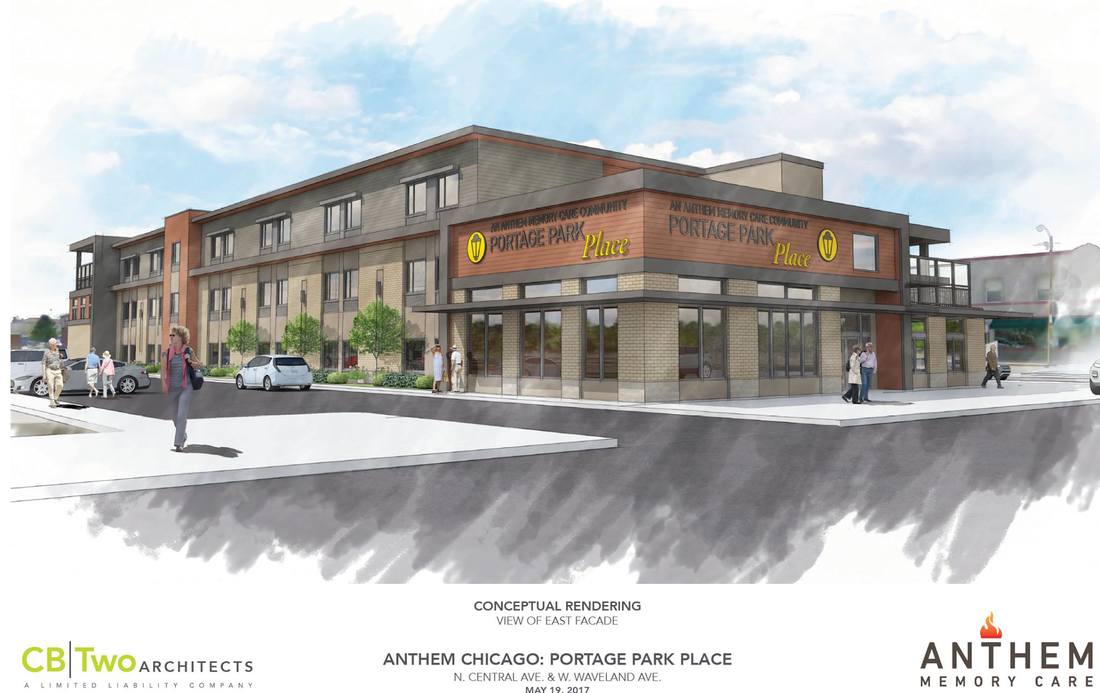 While even this is too much gaudy commercial advertising for a single-family residential neighborhood, just the facility name could be scaled down somewhat and affixed to the building in a similar fashion to help visitors identify it.
If this solution works for Chicago, why is it not being considered for Oak Lawn?

Memo Sent to the Planning and Development Commission

Donald McKenna, the Building and Zoning Administrator, sent the following memo dated March 4, 2016 to the Planning and Development Commission. It summarizes/explains the variations that were being sought in the petitions filed by Anthem Memory Care.
click here to download a PDF version of the memo

The last sentence of memo clearly states... "Section 4-11A-4 of the zoning ordinance limits signage in a residential district to sales or lease of the property, therefore a variation to permit a sign advertising the facility will be required."

Anthem Memory Care never requested a signage variation and yet the site plans including a sign for the facility somehow still made it past the Planning and Development Commission and the Board of Trustees. In fact, the site plans made it all the way to the Architectural and Design Review Commission for review and approval on December 15, 2016 before the signage code violation issue was once again brought into question by a local resident. As a result, that means that almost every elected or appointed village official knowingly voted in favor of a development which failed to meet the village's zoning regulations.

(Note: Commissioner Matt Egan, Trustee Bob Streit and Trustee Alex Olejniczak were the only village officials that voted against the proposed development.)

The Planning and Development Commission voted to approve the signage variation petition during the public hearing held at the Village Hall on Monday, December 18, 2017 at 7:30PM.

Representatives from Anthem Memory Care were directed to reduce to overall size of the monument sign by 25 percent.

The image below shows the difference between what was originally proposed (the dotted outline) and what has been approved by the commissioners - essentially a six foot high by ten foot wide billboard to be placed on a residential side street in an otherwise single-family residential neighborhood... 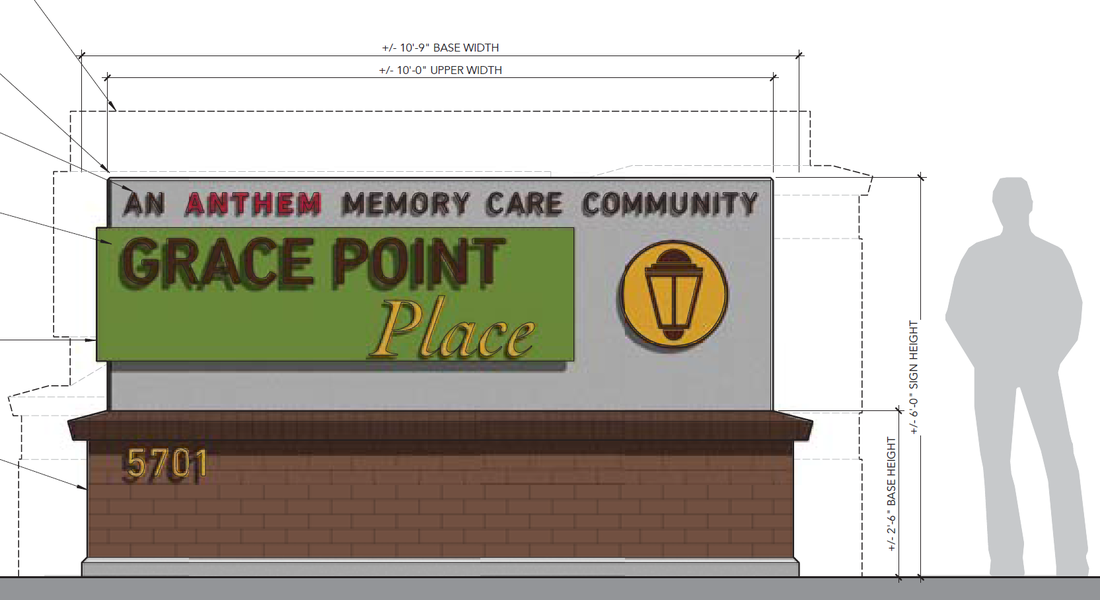 How many other residential homes in the area require signage like this?

The only other monument signs in the entire PUD/R1 zone are located along Central Avenue. That fact was pointed out during an Architectural Review and Design Commission meeting so it appears those monument signs might be used to justify granting the signage variation to Anthem Memory Care. That is kind of a stretch as advertising for a not-for-profit / tax-exempt religious entity is not the same as providing advertising or a brand presence for a for-profit commercial entity that has already been granted substantial variations that will enable their facility to operate in what is otherwise a single family residential area.

I did not research how those monument signs came into existence so therefore I do not know if they simply pre-date the current zoning ordinance (and were thus "grandfathered/exempted") or if they were granted variations following a review process of some type. If a review did take place, I would think that the volume and speed of traffic on Central Avenue would have been a major factor to consider as that stretch of road has four lanes of traffic (two lanes each way) with a posted speed limit of 30MPH.

What I do know for certain is that every other residence in the PUD/R1 zone is restricted to using the basic six-inch numerals posted to the front of their home. Despite this restriction, every home manages to successfully receive mail and other delivery service as well as response from all of the emergency medical services. Visitors to the area are also able to differentiate one house address from another without the need for a large monument sign on the front lawn.

For starters, it is not like someone could drive down 101st Street and not possibly notice the approximately 43,000 square foot two-story commercial facility standing out from the single family residential homes in the area. Finding the facility should not be a problem, so this monument signage will pretty much be there for advertising purposes. The village memo dated March 6, 2016 states as much.

Secondly, Anthem Memory Care was questioned about their signage plans at the Planning and Development Commission hearing held on May 16, 2016. Their response was captured in both the minutes of the meeting and the video of the meeting that was taken and posted on YouTube.

The representative from Anthem Memory Care responded that they will comply with the village ordinances. However, that response is somewhat vague. Are they simply complying with the signage restriction or are they just stating that they will follow the special use permit rules? Based upon the minutes of the Architectural and Design Review Commission meeting held on December 15, 2016 it sounds like there will be another petition filed at some point.

The Long-Awaited Petition for Signage Variation

NOTE 4: The Board of Trustees voted 3-1 to approve the monument sign and its special use permit at the meeting held on Tuesday, January 23, 2018 at 7:30PM.