General lack of information or even worse, misinformation...

As required by village code, the residents within 300 feet of the affected parcels (basically the entire school property since the underlying lots will need to be redrawn to complete the proposed development) were sent public hearing notices in the mail, a public notice was posted in the Chicago Tribune and a sign measuring 22" x 28" was placed on the fence of the bus depot to serve notice of the public hearing. That is all they were legally required to do.

Representatives from Anthem Memory Care also distributed a "welcome neighbor" flyer in the neighborhood on March 18, 2016, which was the Friday before the scheduled public hearing.

The turnout at the Planning and Development Commission public hearing held on March 21, 2016 was larger than anticipated. There were no handouts for those that attended and it was near impossible to see or hear Anthem Memory Care's presentation since they only had a few 24" x 36" poster boards and failed to use a microphone.

Since the meeting on March 21, 2016 most of the information and debate has been conducted over social media. Not all that has been shared has been factual or accurate to say the least. Even the local press is adding to the confusion as evidenced in an article published by the Oak Lawn Patch on April 18, 2016.

This is not an attempt to single the Oak Lawn Patch out for political purposes, but when the article headline is "Village To Hold 'Fact Based' Community Meeting on Proposed Memory Care Center" one would hope the content of the article itself was actually accurate.
(source: http://patch.com/illinois/oaklawn/village-hold-fact-based-community-meeting-proposed-memory-care-center)
This article contains an artist's rendering of the proposed facility. The caption below it reads... "Preliminary drawing of the proposed Anthem Memory Care Center at 10010 S Central Ave, Oak Lawn."

The article later states... "Southwest Chicago Christian Schools wants to sell Anthem approximately three acres in the northwest corner of its Oak Lawn campus. Plans call for demolishing an existing bus barn and relocating the parking lot where there are ten school buses. The memory care center would be built on this site. The Anthem facility would sit approximately 400 feet west of Central Avenue along 101st Street. The north side elevation would face 101st Street; the front of the building would face east toward the school and Central Avenue."

Strike two. Based upon this drawing circulated at the neighborhood meeting held on March 30, 2016 the various stated measurements are incorrect. 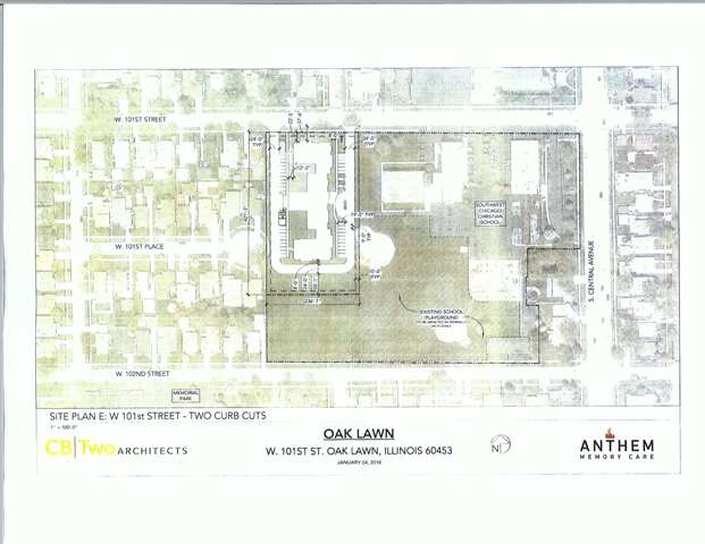 The overall lot dimensions reflected on the drawing (converted to decimal form) are 421.25 feet x 236.5833 feet which means the new lot for the proposed facility has an area of 99,661 square feet (rounded up to the nearest whole number) which equals approximately 2.28 acres. Seems to be somewhat of a stretch to round that figure up to 3 acres. However, when building an approximately 43,000 square foot two-story facility it sounds better or at least less imposing if it is being done on a larger parcel.

The following images were created using the Cook County Property Viewer tool, which can be used to make measurements online... 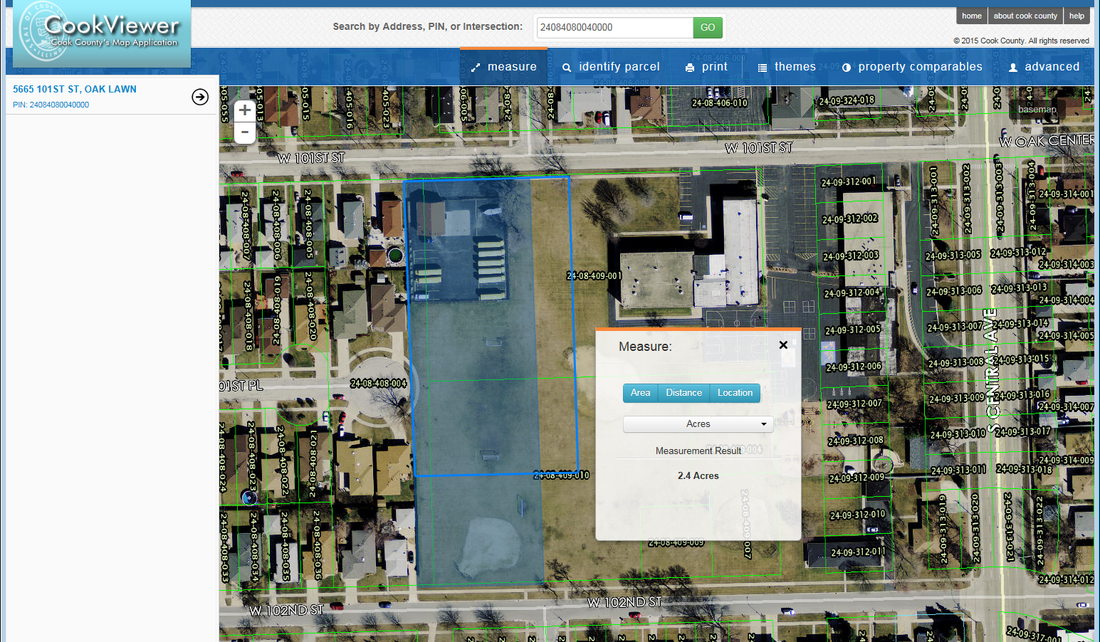 This image is basically what was shown in the site plan drawing above.
The tool isn't the easiest to use (trial and error), so this image shows what a 2.4 acre footprint looks like. 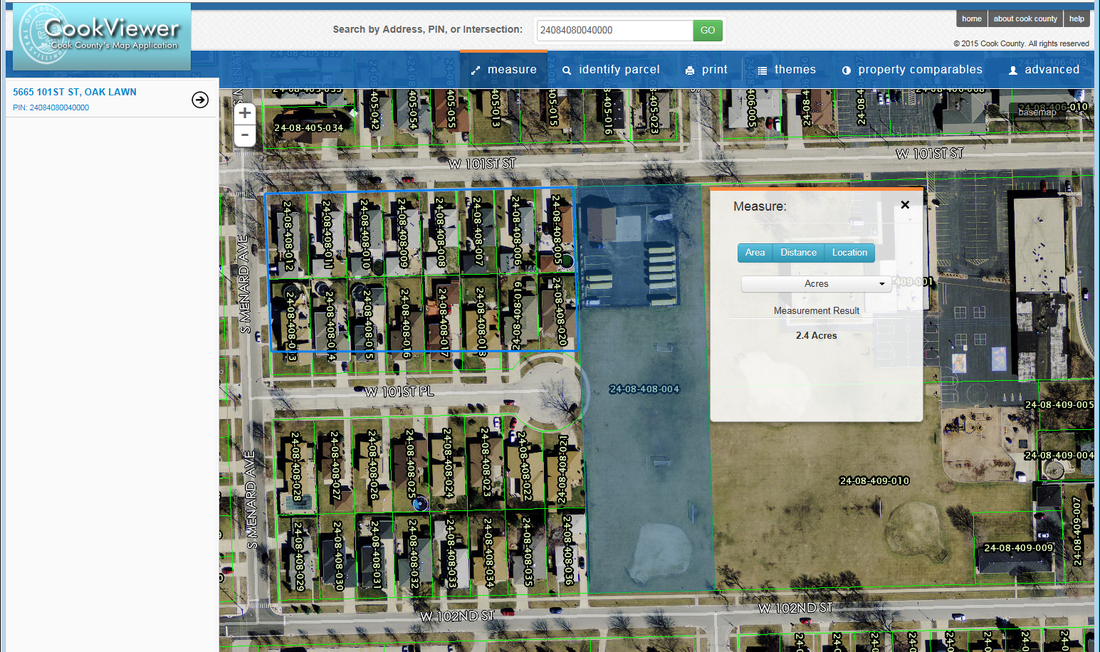 This image shows what happens if you rotate that same basic 2.4 acre footprint clockwise by 90 degrees and then overlay the existing homes next to the bus depot. That overlay approach pretty much entirely covers sixteen homes with what would be an approximately 43,000 square foot two-story facility. 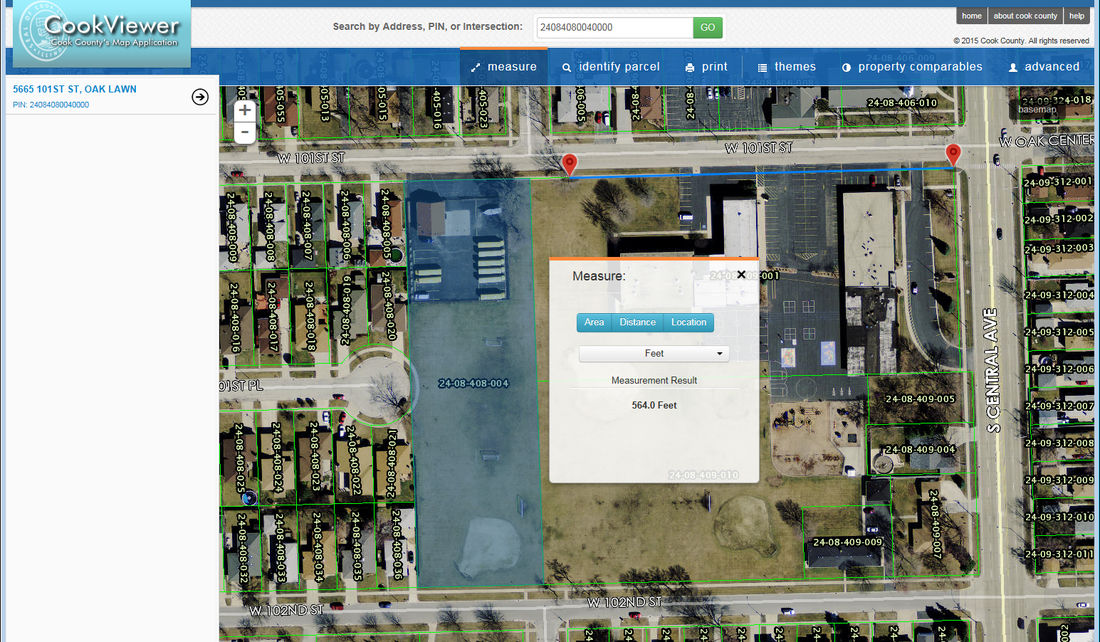 This image shows that the eastern lot line of the proposed facility is roughly 564 feet west of Central Avenue and even more if fully extended out to Central Avenue's right-of-way. It looks like the scale of the site plan drawing was thrown off by printing it out, because using a ruler and the given scale results in a different measurement that was then likely rounded up to the 400 feet quoted in the article. 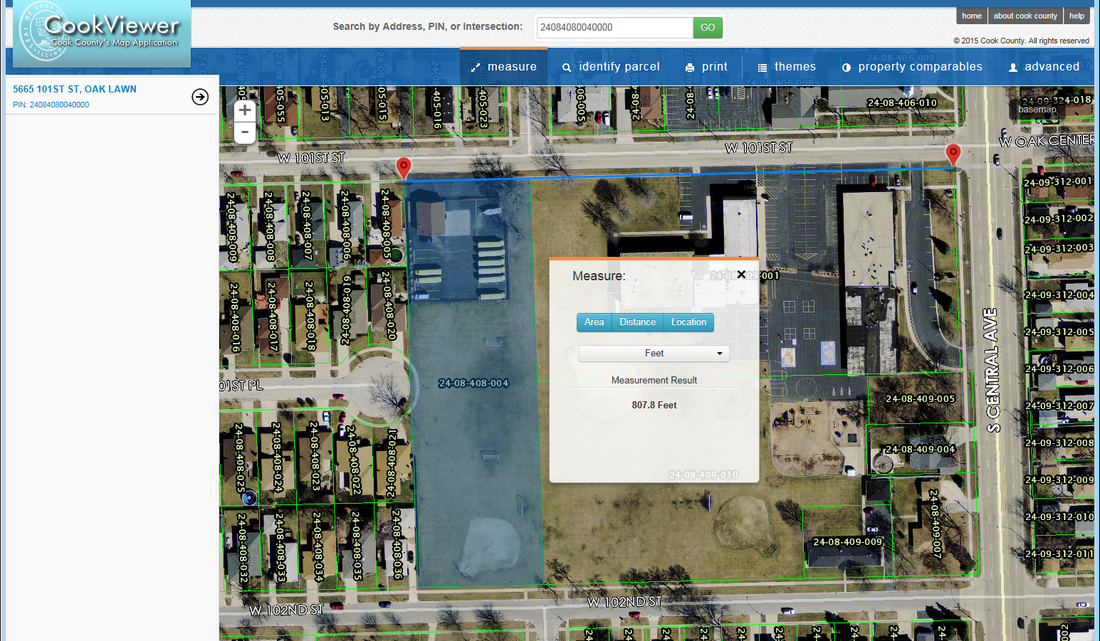 This image shows that the western lot line of the proposed facility is roughly 807.8 feet west of Central Avenue and even more if fully extended out to Central Avenue's right-of-way. Subtracting the two measurements shown in these images results in a figure that is generally consistent with the measurements indicated on the site plan drawing. The estimate using the online tool was 243.8 feet versus the 236.5833 feet indicated on the site plan drawing as the new lot width for the proposed facility.
And finally the article includes a quote from Isaac Scott, principal of Anthem Memory Care... "Scott says the building would share its western property line with two homes on the west; three homes, including Andrews’, are across the street."

Strike three. As indicated in the site plan above, the shared lot line between the neighborhood and the proposed facility parcel extends 421.25 feet south from 101st Street. While it is true that the facility would only occupy the northern end of its proposed parcel, the shared lot line goes past two houses, the cul-de-sac street and the front half of another house before turning back east towards the school. Two houses, three houses - no big deal, right? Well, there might also be a six foot masonry wall along that entire shared lot line to act as a buffer if the village code is followed. Not to mention that the current bus depot location and adjacent open green space field / floodplain will be replaced by an approximately 43,000 square foot two-story facility.
The Oak Lawn Patch was contacted about these errors, but the article has not been revised or otherwise corrected. As a result, anyone reading it without actually studying it may incorrectly think that this facility will be located on Central Avenue or at least not far from it. Failing to correct the errors or leaving out details could leave a reader to think "So what's the problem?" or "That doesn't seem too bad."

It is misinformation at the very least and likely adding to the number of "confused" residents.

Maybe to clear up this confusion the village residents, commissioners and board members should use Google Maps to conduct some measurements of their own along 95th Street, Cicero Avenue or any of the other commercial corridors in the village. One might find a few exceptions (the area around Christ Hospital for sure), but the commercial development generally ENDS once you go one full block away from any of those busy commercial corridors. If the Anthem Memory Care facility petition is approved, it will START one full block west of Central Avenue. How does that fit with the neighborhood or even the village for that matter?
Powered by