Jack Gallagher, Village Engineer/Director, spoke near the conclusion of the Planning and Development Commission hearing that was held on March 7, 2016. An official summary of his comments can be found on page 5 of the meeting minutes, where he stated the goal of the P&DC is whether a petition will "fit with the neighborhood" and what impact it may have. Agreement with that comment was voiced by Commissioner Hasan Kishta as reflected in the minutes snapshot shown below...
Those words seem somewhat prophetic and it now remains to be seen if the expressed goal of the Planning and Development Commission will be followed.
If the footprint of this proposed facility was rotated 90 degrees clockwise, it would stretch westward almost all the way to Menard Avenue. That rotated footprint would cover/replace the eight houses on the south side of 101st Street that are west of the bus depot as well as cover/replace the northern half of the lots for the eight houses located on the north side of 101st Place. That is the scope of this project - basically sixteen single family residences. Then factor in the two-story nature of this approximately 43,000 square foot facility. Does that proposed facility sound like it will "fit with the neighborhood"?
And finally, maybe the village residents, commissioners and board members should also use Google Maps to conduct some measurements of their own along 95th Street, Cicero Avenue or any of the other commercial corridors in the village. One might find a few exceptions (the area around Christ Hospital for sure), but the commercial development generally ENDS once you go one full block in either direction from any of those commercial corridors. If the Anthem Memory Care facility petition is approved, it will START one full block west of Central Avenue. 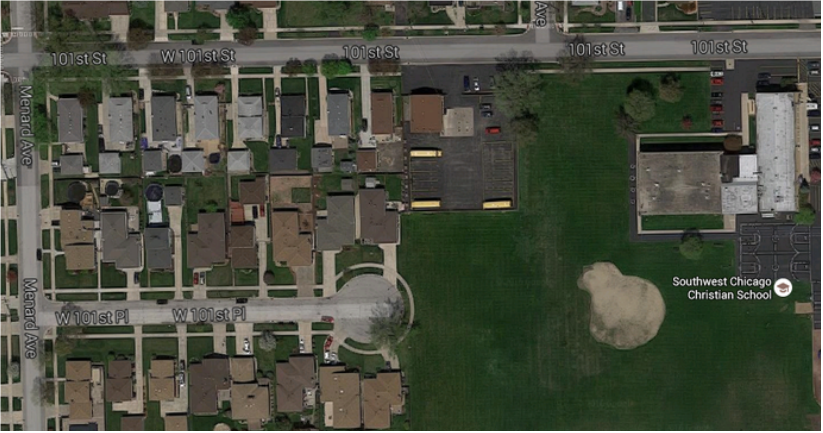